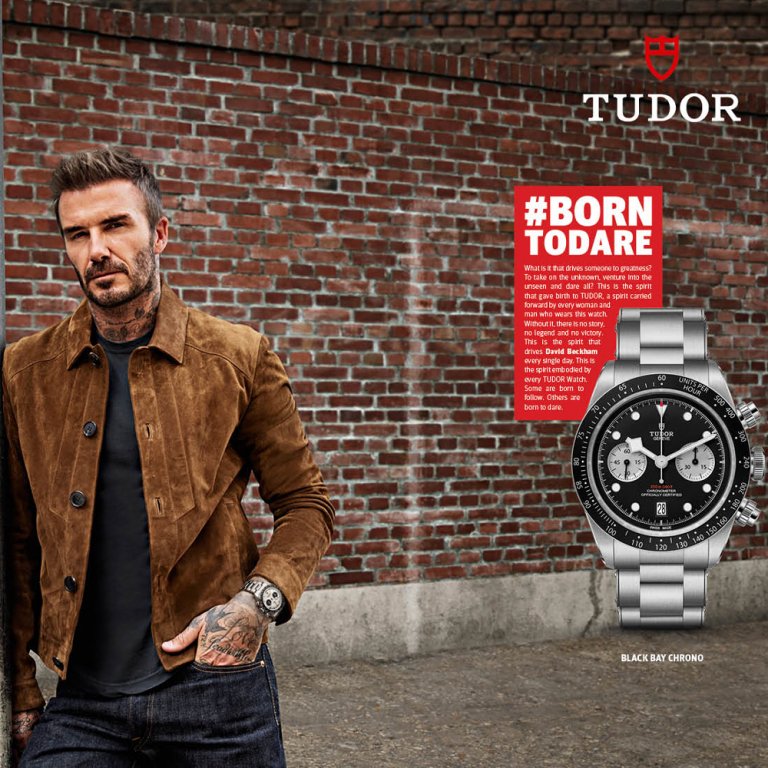 What is it that drives David Beckham to achieve great things? What took him from a child dreaming about professional football to the icon he ultimately became? This new campaign centres around the spirit that defines David Beckham. The spirit of being Born to Dare.

David Beckham’s story is about a passionate young boy who followed his dreams… With unshakeable determination, this lover of the beautiful game defied the adults who scoffed at his footballing ambitions, carving out a career that has continuously inspired each new generation.

The film for this campaign was partly shot in an area of London featuring the English capital’s distinctive architecture, not unlike where David Beckham grew up. In a sort of flashback, it splits between the enthusiastic young dreamer and the man pushing him to outdo himself. David Beckham was this child. He’s experienced highs and lows. He’s managed to achieve great things. Since then, he’s become an icon, with a spirit that inspires. The spirit of being Born to Dare.

Tudor is born to dare

The TUDOR signature is #BornToDare. This slogan reflects both the history of the brand and what it stands for today. It refers to the vision of Hans Wilsdorf, the founder of TUDOR, who manufactured TUDOR watches to withstand the most extreme conditions, watches made for the most daring lifestyles.

It tells the adventures of individuals, usually anonymous, who have achieved the extraordinary on land, on ice, in the air or underwater, with a TUDOR watch on their wrists. Finally, it is testimony to TUDOR’s pioneering approach to watchmaking, which continues to make it what it is today.

At the cutting edge of the watchmaking industry, the brand’s innovations are now essential benchmarks. The TUDOR “Born To Dare” spirit is supported throughout the world by first-class ambassadors, whose life achievements result directly from a daring approach to life.

Remaining faithful to the Black Bay aesthetic, the Black Bay Chrono model has made the famous “Snowflake” hands – a brand signature for divers’ watches since 1969 – its own, in a version honed to ensure optimum readability of the information on its domed dial. Available in two versions, matt black or opaline, the dial includes two hollowed sub-counters in contrasting colours, matt black and white opaline respectively, for optimum readability.

Their finish is rounded. Inspired by the first generation of TUDOR chronographs, there is a 45-minute counter and a date aperture positioned at 6 o’clock. The recognisable characteristics of the Black Bay are preserved in a steel case with a 41-millimetre diameter refined by the ingenious cut of the lower part of the sapphire crystal and a repositioned movement.

Among its many distinctive technical features, this model is waterproof to 200 metres (with each watch factory-tested to 625 metres) and comes with a case and bracelet in 316L stainless steel, and a movement manufactured by TUDOR and certified by the COSC, boasting a 70-hour power reserve.